In many ways, the entire #LiveFully effort has been an experiment. It began in December of 2011, when I (Brian Burchik) sensed that God was calling me to start a blog and begin writing a book, both with the name #LiveFully (and yes, for some reason, I saw the hashtag in there).

All of 2012 and much of 2013 was consumed with writing, and it was extremely helpful to test content on the blog and tweak the book accordingly. Along with the brilliant Evan Forester, we wrote consistently on the blog for these years, and your support and encouragement was amazing.

The #LiveFully book launched in the fall of 2013, and the response was good. However, after a month or two, I had a nagging conviction that the book was meant to be processed differently than the way you typically read a book alone.

In December of 2013, it became clear that the #LiveFully book would serve as a textbook for a wider school curriculum. In a rare moment, God provided exactly what I wanted in the exact timing I hoped for, and I was given the opportunity to pilot the course with students in January 2014.

This began the curriculum project that would consume the entire year. It was an intense and exciting year, and by the start of 2015, the #LiveFully Bible curriculum was complete and ready to be sold.

Around this time, ACSI (Association of Christian Schools International) became increasingly interested in the #LiveFully curriculum. In perfect timing, this global network of schools decided to become a reseller of the course for the upcoming school year. 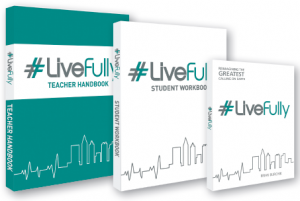 This summer represented the first major “selling season” for the course, and we have been really encouraged at how schools have responded so far. As of today, here are the numbers of schools and students that are engaged with the #LiveFully curriculum.

And we are so excited to announce that we are partnering with ACSI for the inaugural #LiveFully Conference in Atlanta, Georgia this March. With several hundred high school students and their advisors, we will gather to experience Christ in a fresh way while gaining a powerful yet realistic vision for how to join God’s redemptive work in the world.

I am incredibly grateful for your support as this #LiveFully experiment has unfolded. Currently, the blog has taken somewhat of a back seat to our work with the curriculum and schools, although Evan has offered some great posts like this recently.

We are taking some time to re-evaluate the blog & the best way to share this message of abundant life moving forward.

As we move into the future, I am increasingly convinced that Jesus is offering fullness of life for anyone who wants it. He is the source of the most abundant living on the planet, and we will share this message in as many different ways as he opens for us in the future.

If you’re interested in learning more about the course and know a school that could use it in their spring curriculum, you can visit the Scholar site or contact us here.

Thanks for who you are and your support!

This post was by Brian, a leader seeking to know the "why" behind the "how"
Loading Comments...