Why you should honor President Obama

Election season is upon us! We actually just had national elections in New Zealand, and political campaigns in the USA are ramping up for this November’s mid-term elections. As these things happen, everyone becomes a little more opinionated.

1 Peter 2:17 has something interesting to say about politics, “Honor everyone. Love the brotherhood. Fear God. Honor the emperor.”

In the USA, there is obviously no Emperor, but if Peter were writing to Americans the last phrase would say “Honor the President.” Most Christians think it’s a good idea to honor people, love the brotherhood, and fear God. None of us are perfect, but we’ll at least try.

When it comes to honoring our leader, however, I think we often fall short. America today has become extremely polarized politically. It seems like there are two groups over the last decade: Those who hated Bush and those who hate Obama. Now, most Christians wouldn’t say they “hate” either of them, but their actions and comments tell a different story.

There is a joke in the South: you can say anything you want about someone, as long as it’s followed by “bless his/her heart.” For instance, a woman might say, “That boy is completely lazy and throwing his life away, bless his heart.” In Christian politics, I think we have a similar rule. We call him liar, snake, tyrant, or even the antichrist and then follow it up with “you don’t have to like the man, but you must respect the office.”

But is calling someone a liar and a snake and a evil tyrant really respecting the office? Is this what God meant when He called us to honor the Emperor?

You might argue back, “but we have (or have had) a really bad president! How am I supposed to honor him?!”

Just to be clear, I’m writing to both sides of the political spectrum. I know Christian democrats and republicans, and both can make the mistake of despising the President. As bad as you might think whoever the leader of your country is (if you don’t today, you might in 5 years), he or she is nothing compared to the Emperor during the time of Peter’s letter writing. In fact, there are several leaders in the Bible who did not deserve honor, but God calls his people to show them honor anyway.

The Crazy “Emperors” of the Bible

1) Emperor Nero: Peter wrote his letter, from Rome, during the reign of crazy Emperor Nero. That’s right, this is the same Emperor Nero who had already murdered his mother and wife, lived a hedonistic lifestyle, and would eventually be blamed for torching 75% of Rome. His response to the accusations? Blame the Christians. He then killed hundreds, if not thousands of believers. His favorite method was lighting them on fire and using them as torches in the city at night. 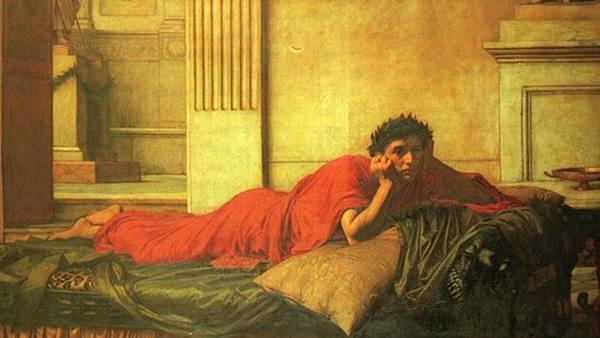 So when Peter calls us to honor the emperor, he wasn’t referring to a benevolent leader who cared for his people. The Bill Clinton and Monica Lewinsky scandal had nothing on Nero’s antics, but still, Peter called the people to honor him.

2) King Saul: The first anointed king of Israel was not good. He repeatedly broke the Lord’s commands and wanted to destroy his most faithful servant: David. In fairness to Saul, God did anoint David to take his place as King, but David never lifted a finger against Saul. The King repeatedly tried to kill David, even going to a witch and killing priests who had helped protect the future king.

David had Saul within his grasp. He could have easily killed him and put an end to the madness, and taken his place as King. But instead, David spared his life. When Saul came after David again, he found himself in a similar position, and again David spared Saul’s life. David explained his reason for this: “The Lord forbid that I should put out my hand against the Lord‘s anointed.”

3) King Nebuchadnezzar: Aside from having the craziest name in the Bible, Nebuchadnezzar is also famous for absolutely destroying Jerusalem. He then brought hundreds of thousands of exiles back with him to Babylon, including the now famous Daniel, Shadrach, Meshach, and Abednego. At one point he promises to kill all of his advisors because of a bad dream, and later he actually throws Shadrach, Meshach, and Abednego into a fiery furnace because they won’t worship his golden statue (they survive by a miracle).

Despite all this, when Daniel is asked to interpret a dream that will bring judgment upon the King, Daniel does not revel in it. He doesn’t say, “I knew you had this coming! You destroyed my home and tried to kill my friends. Now you’re going to get what you deserve.” Instead, Daniel was actually “dismayed.” Daniel begins the judgment on the King by saying, “My lord, may the dream be for those who hate you and its interpretation for your enemies!”

Daniel demonstrates a sincere love for the King. He finishes the interpretation of the dream by saying, “Therefore, O king, let my counsel be acceptable to you: break off your sins by practicing righteousness, and your iniquities by showing mercy to the oppressed, that there may perhaps be a lengthening of your prosperity.”

Daniel doesn’t want the King’s destruction, but rather his redemption.

How we can “Honor the Emperor”

The Bible is clear – we should honor our leaders. But how do we do it? How can you lift up a man or woman you completely disagree with? Again, the bible offers some good suggestions:

1) Pray for your leader: 1 Timothy 2:1-2 says, “First of all, then, I urge that supplications, prayers, intercessions, and thanksgivings be made for all people, for kings and all who are in high positions, that we may lead a peaceful and quiet life, godly and dignified in every way.” This one is simple – prayer makes a true difference. I often wonder how our leaders would be different if every Christian prayed for their leader everyday. Not only would it have a positive impact on our leaders, but also on our own life and the nations we live in as well.

2) Desire their redemption: I love Daniel’s example so much. There is a genuine care for the King, and Daniel doesn’t want to see harm come to the King. Instead, he hopes Nebuchadnezzar wil repent and worship the Lord. Paul had a similar approach with the leaders of the Roman empire. In Acts 26 he shares the gospel with King Agrippa, who responds, “In a short time would you persuade me to be a Christian?” And Paul said, “Whether short or long, I would to God that not only you but also all who hear me this day might become such as I am.”

3) Speak well of them: David never refers to Saul as “that idiot psychopath who will ruin my life.” Instead, he calls him the “Lord’s anointed.” All rulers are established by God, and because of that, they deserve our respect. Next time you feel the need to rant about your leader, look to David’s example instead.

Do you have to agree with everything a leader does? Of course not. You can even ask him to change his ways or policies (like Daniel). But we must do all things in a way that honors and respects them.

Your turn: There are, of course, other ways you can honor your leaders. What would you suggest?

This post was by Evan, an adventure enthusiast learning to #LiveFully in New Zealand. He now writes for Embracing Exile.
Loading Comments...