One Simple Phrase That Holds You Back

Most of the time, when I hear people saying “that will never happen to me” it refers to a tragic event. “I’ll never get in a car accident, I don’t need a seat belt” or “A tornado will never hit our home” or “I won’t be the one to get cancer.” 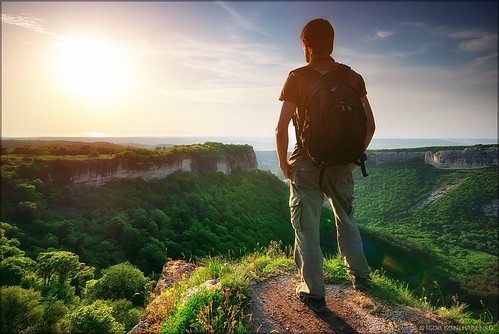 But sadly, those things do happen to people. And for this reason, it is always important to be prepared. You don’t want to end up saying, “I never thought this would happen to me.”

But what if we flipped that saying on its head? We doubt anything horrible will happen to us, but we also don’t believe anything particularly great will happen to us either. We look at professional athletes as kids or successful businessmen as adults and think, “that will never happen to me.”

That phrase, however, holds us all back: If you have a dream, but don’t believe you’ll ever achieve it, then why try? We talk ourselves out of living our dreams because we fear failure. We’re never prepared, and so when opportunities arrive we rarely go for it.

And if you try, you may, indeed, fail. But the beauty of life is we can always try again. And again. And again. (Unless of course, your dream is flying out of an airplane without a parachute. You only get one chance to get that right.)

Many of the greatest influencers of all time had massive failures. Steve Jobs got fired from his own company, Michael Jordan was cut from his high school basketball team, and Abraham Lincoln lost 8 different elections before becoming President. But they kept persevering, and they changed the world.

4 years ago, my wife Morgan spent a few months studying in New Zealand. She met a friend named Kate who had moved from the USA with her husband Blaine. She told Morgan, “I used to think we would never be able to move overseas. But here we are! It was one of the hardest things I’ve ever done, but it is the best thing we’ve ever done for our marriage.”

Morgan had always thought the same thing. She wanted to move overseas, but it seemed too hard. But once she learned that Kate had the same dream and then achieved it, Morgan’s thinking changed. No longer was it, “that will never happen to me.” Now, she had a far greater mentality: “Why not me?”

James 5:17-18 says, “Elijah was a man with a nature like ours, and he prayed fervently that it might not rain, and for three years and six months it did not rain on the earth. Then he prayed again, and heaven gave rain, and the earth bore its fruit.”

When you look at great heroes and people who inspire you, remember that they are men and women with natures just like your own. What’s more, because of the work of Christ, you can have God’s power moving through you!

You have a dream. We all do. Instead of thinking, “that will never happen to me,” start asking yourself, “Why not me?” It won’t always be easy, but the best things in life are never easy. In fact, it might just end up being the best thing you’ve ever done!

After changing your belief, then the first step towards achieving your goal is daily prayer. God can do anything, and He’ll either enable you to achieve your goal or change your heart to something better.

You don’t have to wait. You can start today. Why not?

PS: What is one of your life ambitions? Leave an answer in the comments!